I'm a "weird" person.  Actually, I prefer the term "eccentric".  I take after my mom in that way.  I take after her in a lot of ways and when it came to bounding out for my faith, living different was something we were hard-wired for.  So when I saw the opportunity to read behind the title of "Keep Christianity Weird; Embracing the Discipline of Being Different" by Michael Frost, I was more than up for the task. 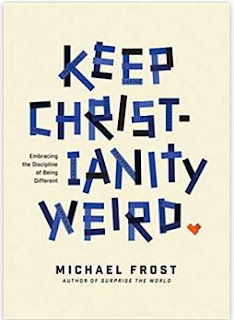 Michael caught my attention on the first page of his introduction when he pointed out, "...it was their very difference from their dominant culture that made the early church such an intriguing community in its first few centuries of existence."  I couldn't agree more.  And I wanted to applaud him when I read, also in the introduction, "If our churches are filled with people living the same what as everybody else does, what do we have to commend?" This has been my own gravest assessment of the church today as well.

However, as the introduction came to a close, the applause grew quiet and I began to recognize more eye-brow raises then positive pencil marks going into the margins.

I felt as though a good portion of this book was filled with Michael Frost's quotes of other authors, theologians and even secular artists.  As a matter of fact, he spent multiple chapters expounding on the high points of a particular social experiment some major U.S. cities have tried.  An experiment I would say is comparable to full-fledged socialism itself and the only critique he makes of their idea is a vague reference to if Christianity had had some roll....  The multi-chapter long reference seemed to have no clear tie to the overall message of his thesis.

His verbiage was often times frothy and he constantly cycled back to the environmentalists' movement in a vague but seemingly supportive assessment almost suggesting perspective church attendees weren't wrong to look down on the church for it's wasteful use of paper cups at church-funded gatherings and cars running while waiting to pick up friends and family from services and activities.  All-in-all he seemed to accuse the church of being irrelevant and getting their just comeuppance as a result.

As if that wasn't bad enough, he closed the book sharing how he was currently part of a protest movement which found him (proudly?) arrested for disrupting a local business.  While his cause for concern (the treatment of refugees to his country of Australia) warranted some sort of action, his disruptive handling of the situation and ignoring authority completely ignored God's Words through Paul in the book of Romans:


Let everyone be subject to the governing authorities, for there is no authority
except that which God has established. The authorities that exist have been established
by God. Consequently, whoever rebels against the authority is rebelling against
what God has instituted, and those who do so will bring judgment on themselves.
Romans 13:1-2

This book left me to wonder: if Michael Frost represents the average cross-section of spiritual leaders among the English speaking countries today, then it is no wonder our churches are dieing.

In conclusion, this book was the biggest disappointment I've read in a long time.

Tyndale House Publishers has provided me with a complimentary copy of this book in exchange for my honest review.