Imitations and Implications, Join Me? 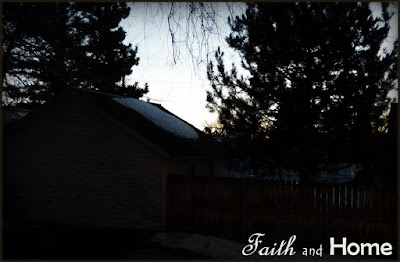 Posed in my high back chair at the head of our dining room table in the early, quiet, dark hours of the morning, a dim bulb illuminating from above, I poured over the passage sprawling across the warn pages of my ESV...


Brothers, join in imitating me, and keep your eyes on those who walk
according the example you have in us.
Philippians 3:17

On this chilly February morning, I saw.

...keep your eyes on those who walk according the example you have in us.  What was this example?  In Paul's letter to the Philippians he shares some but digging deeper, a vast world of understanding opened before my eyes...


For I think that God has exhibited us apostles as last of all, like men sentenced to death, because we have become a spectacle to the world, to angels, and to men.  We are fools for Christ's sake, but you are wise in Christ.  We are weak, but you are strong.  You are held in honor, but we in disrepute.  To the present hour, we hunger and thirst, we are poorly dressed and buffeted and homeless, and we labor, working with our own hands.  When reviled, we bless; when persecuted, we endure; when slandered, we entreat.  We have become, and are still, like the scum of the world, the refuse of all things.

I do not write these things to make you ashamed, but to admonish you as my beloved children.  For though you have countless guides in Christ, you do not have many fathers.  For I became your father in Christ Jesus through the gospel.  I urge you, then, be imitators of me....
1 Corinthians 4:9-16

Paul is not complimenting the Corinthians.  On the contrary, he is admonishing them.  He is pointing out how they stand... and the contrast it is to how he and other disciples of Christ stand in the Lord.  And while the epistles are replete with evidence of how the faithful of faithful followed Christ, something in this passage of Corinthians stirred inside of me.

Not-one-positive-thing-is-said of Paul and his companions and their condition and consideration... at least by worldly standards.  They are spectacles, fools for Christ's sake.  They seem down-and-out.  YET, and here is the one positive, in harsh situations, instead of retaliation, they bless, endure, and entreat.  While the Corinthian believers  appear wise, strong, and held in honor... Paul doesn't commend them for this.  Instead, he stops just shy of condemning them.

But, Paul, I thought wisdom, strength and honor were desirable attributes.  Yet, I don't think he is saying they are not.  Rather, I believe he is pointing to WHO counts believers as wise, strong and honorable... because, by the world's standards... few (if any) believers would attain such praises.

As Christians, we can see the work, devotion to scripture, sacrifice and endurance of fellow believers and whole-heartedly and rightfully so consider them wise, strong and honorable.  Yet, these same people, according to Paul, would seem fools to the world.  Their work and devotion: a spectacle.  As a result the world will revile, persecute, slander... even consider such faith-filled believers scum.

My mind was drawn back to the now.  To the implication of Philippians in the face of Corinthians.  To thinking on church and Christianity and this rat race to be the example, to follow me as I follow.  Leaders, followers, all looking.  But looking where?

In the now, people want fads.  People want to be told they can look like the world, be excepted by worldly friends, do worldly things, be honored, wise and seen as strong... commended.

Now.  People gather around the latest fads and trends in ministering.  They clamor to praise, and be praised.  They search for the wide, easy, road where all self-propelled pursuits, desires and passions are justified.  Fads and trends which allow them to keep status-quo.

A comfortable faith.
A praiseworthy faith with applause from the world.
A rusting honor.
Crumbling strength next to faulty wisdom.

Funny.  The scripture address just happens to have a lot of 1's! Aptly so because there is only....
One idea.
One interpretation.
One message.
And all from One person in Jesus Christ.

As we lead others to imitate us... let us not forget to lead by Jesus' example... not our own or someone else's idea, interpretation, message or self-desire.  Simply Jesus.  What did HE do?  What were HIS ideas?  How did HE interpret? What was HIS MESSAGE.

As we follow in imitating others... let us be real in asking if that person is really imitating Christ... or are they simply an imitation.  Do they speak their own ideas, words, opinions and interpretations... are they speaking others' ideas, words, opinions and interpretations... OR are they sharing God's amazing Word as-it-is... raw, hard, and, at times, uncomfortable and convicting.  Are they making themselves look like fools... a spectacle to the world - or are they honored by the world because they are so good at looking like it?

I heard Francis Chan recently speaking at a conference for leaders (I shared the video on my Facebook page.)  I loved how he explained he didn't know everything there was to know about God's Word, BUT, if he came across anything that differed from what he thought.... he didn't try to make God's Word fit His ideas or the latest fads.... no... he would recognize he needed to change his pattern of thought to fit the pattern of Scripture.

Paul did.  He only imitated Christ.  Not Peter, not John.... just.Christ.  And I believe the only reason he called others to imitate him, wasn't because he was special, but because he was humble and because he sought, with his whole heart, to look like his savior.

I pray, whether you are a leader or a follower... or both.... that you see and imitate only that which is wholly and completely Christ.