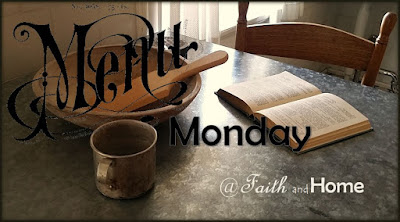 It's a fresh new week and a fresh new approach to MANY things, including menu planning!  If you didn't catch last week's Thursday post you can check it out here.  This wonderful, rejuvenating message from God's Word has given me the release and peace to 'get back in the game' of life and start tackling bigger things with greater focus.  I'm excited, especially as a few other impactful things happened this past week which directly effect my menu planning:

#1, hubby announced he is getting tiered of eggs every morning!  This was news because for a number of years that has been his go-to breakfast (he even requests them with pancakes when I make those!)  He put in an order for more oatmeal, which is fine because it is good for his cholesterol.

#2, the kids and I decided to join the church choir for the Christmas program, which is exciting in itself but, when hubby suggested HE make dinner since we won't get home till around 6:30 on Sundays due to practice, I felt super blessed. He isn't going with us to choir rehearsals so it is nice how he wants to jump in and love on us through meal prep.

#3, the biggest change to impact my menu planning is the way we use what we have.  I have recognized a progressingly bad habit of not using ALL my resources in meal prep.  I think the habit developed with the move when I was making quicker meals and taking the easy way out on some dinners in order to rush things along (even eating out more than we have all year combined!).  I want to make a commitment to be an even more frugal cook than I have been and still provide delicious meals.  It may seem like I'm re-stating what I already do but actually, this is a challenge to myself to find new ways to use ingredients I keep shoving to the back of the pantry or fridge/freezer.  I recognized the need this weekend when I looked into my freezer and realized the small space is half loaded with garden produce I put up just before the move.  I need to plan meals which can include all those little extras more often  =  Save space and money!  Double bonus!!  (I think it is part of that whole Balance thing I feel called to this year!) 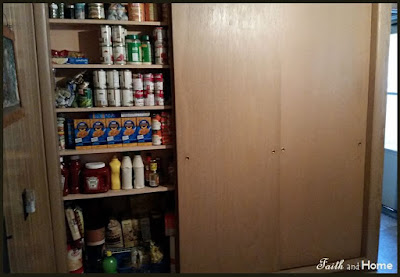 One thing I did to prop my frugality was to use some of the extra money we have this month (due to no mortgage payment till November) to stock up at Costco on things which are more cost effective bought in bulk but typically too expensive to buy in a regular month on our budget.  I am hoping these purchases will see us through until another budget boost which we are blessed to receive about every 3-4 months due to pay cycles and income taxes.  These will be my spring-boards throughout the year.  Hubby and I needing to curb our portions is another incentive to cut spending and make due!  We need to trim more than budget and meal out-sourcing!!!


This week we will be attending TWO games, Brooke's last week of multiple games (assuming they don't make finals beyond day one.... which I am certain they won't).  Tuesday's game will be immediately followed by youth group and hubby is joining me to do our Wal-mart shopping.  Dinner that night will reflect the goofy schedule since we won't be back at the house until after 8pm (a bit late for a hearty meal).  Thursday's game is typical but the slow cooker will be pulled out so we can eat upon arriving home.  Wednesday is another youth group so I like meals which are quick to fix and easy to clean up.  Most evenings I hope to escape to the craft studio since I am participating in a craft show next month and want to have good stock ready in plenty of time. Timely meals will be crucial to this aspiration since my body doesn't respond well to staying up late (I hope to wrap-up my work time by 8/8:30).  I'm excited for the challenge......

BREAKFAST....
- eggs (me, I need that protein)
- oatmeal
- cereal
- french toast
- banana bread
* In trying to clear space in my freezer I have a plethora of bananas.  I freeze them when they start to turn then, when I am ready to make banana bread, I pull them out a few hours ahead of baking, let them thaw, snip off the very top where you pull the stem, and squeeze from the bottom straight into a measuring cup.  Mashing is quick and easy and the final sweet loaf is delicious.

Monday
Greek Style Chicken Salad with Dill-Cucumber Sauce and Pita Bread
I splurged on Costco Pita bread this week which is phenomenal with my chicken salad.  Simple: cubed boneless chicken fried in oil (olive is best but I use Canola) and while it fries I season it with Greek Seasoning which you can get in the baking isle at Wal-mart and some grocery stores.  Serve over a tossed salad with with Ranch dressing or the Dill-Cucumber dressing.  I make mine from scratch using an old Betty Crocker Recipe (2 Tbsp Mayo or Salad Dressing, 2 Tbsp Sour Cream, 1 Tbsp chopped Cucumber, 1 Tbsp fresh dill OR 1 tsp dry dill... process in food processor or blender... I usually triple the recipe)

Tuesday
HOT lunch and cold sandwiches.... I haven't quite figured out the details yet!

Wednesday
Stroganoff, Mashed Potato, Green Beans and Fresh Bread
We have ours over potatoes instead of noodles, it is better on the starches and digestion AND it is actually more filling.  For the 5 of us (all teens and adults) I use 2 lbs ground beef (or turkey), fry with some chopped onion, sprinkle on garlic powder, salt and pepper to taste.  Spritz in some Worcestershire sauce.  Drain.  Add 2 cans Cream of Mushroom soup, 1/2-2/3 can beef stock (I use water and half a teaspoon beef bullion) and 1-2 Tbsp Worcestershire sauce. Stir and warm well over medium heat and serve over mashed potatoes or egg noodles.  (You can add parsley and/or fresh garlic when cooking for additional flavor)

Thursday
Slow Cooked Sweet and Sour Chicken with Yellow Squash, Frozen Green Beans and Rice
The rice isn't frozen!  I will throw the veggies and rice in the pot just before we leave for the game so it is all warm and ready when we return.

Saturday
Burgers and Fried Yellow Squash Medallions (My freezer is insanely full of these because my garden wouldn't stop spitting them out this year!!!!!)

Sunday
Pizones.
I revived these from my old menus last week and everyone raved, having forgotten how much they loved them!  I have had multiple requests for a repeat.  I may prepare them before we leave for rehearsal and have hubby pop them in the oven at their appropriate times.  This works well because i we are late getting back, pizza is still good when it starts to cool down!

What are you cooking this week?