Is it Friday yet already? Our first fullish week back to schoolwork ALL together in FIVE (yes 5) weeks.  It went better than expected with afternoons spent more as accidental schooling than our typical middle/high school directives.

In case you don't know what I am referring to, I have a small rant about it in Chicken Noodle Confessions last week.  Easter was suppose to wrap-up our 2 week break (which started early on account to various illnesses).  Isn't it wonderful to see how art exploration blessed me Easter morning? 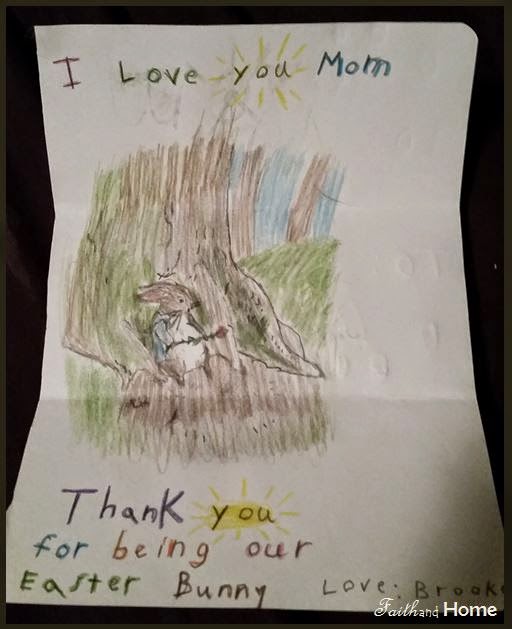 Easter Bunny debate aside, my kids tend to believe longer than the average.  Brooke turned 12 this year and started youth group.  I felt it was pressing to let her in on the 'magic' of the holidays lest she come under ridicule by her older peers when Easter Bunny discussions arose.  We have a special way of breaking the news, she was sad at first but in the end, it made Easter her favorite now because she appreciated her Savior even more (it's a long story but the 'card' says it all!) 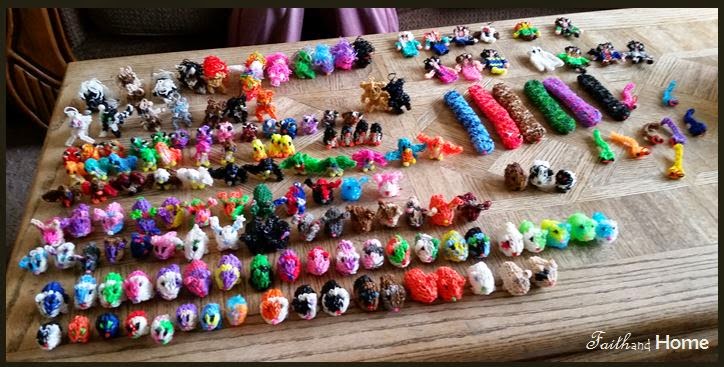 At the end of this past week, as Ashley's 2nd... or was it 3rd???.... round of sickness was hitting fever pitch, she decided to seek peace in some sort of accomplishment if it couldn't be homework!  She lined up her rubber band creations to help in the decision on what new creature to add to the collection. She plans to sell these at the Farmer's Market, though she never hesitates to give them to kids at Bible club or youth group for some cheer. Last week rounded out not only feeling like spring but looking like it as well.  I felt blessed to be out-and-about even if only with ONE well child and blessed to live in such a simply pretty town... the picture does it no justice but if you look close, you can see the signs of spring!  Brooke and I ran errands and visited the Library where we found some videos on scientists, exploration, and the American Girl movies.  Something to help the sick-time with Brenden and Ashley not so.... wasted.... for lack of a better word.  I think that is what I despise most about illness in our house: NOTHING is accomplished and when the illness drags on I feel like so much learning time is lost, especially since the two sick ones are high schoolers.

This is also critical because Ashley does entrance testing next month for dual enrollment at a local Christian college.  Her ADHD and tendency to panic along with our travels and the lack of more consistency have me nervous if everything will transition smoothly.  I so want to see her making greater leaps forward in her curriculum this year. 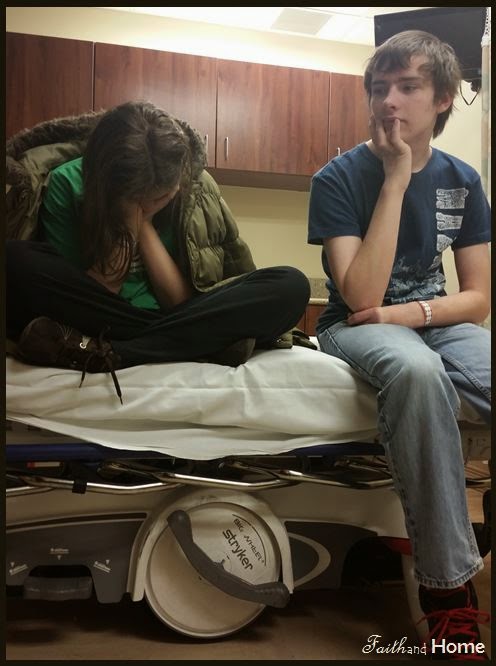 And just when things looked up.... we spent Saturday morning in the ER.  Ashley was apparently having Bronchiospasms and Pharyngitis.  Brenden appeared to have strep.  Another round of antibiotics. I was super worried this week would be week number SIX with no school.  However, the good Lord blessed us with healing on the upswing by Monday.  Brenden and Ashley didn't feel GREAT but they were well enough to push through basic lessons.  I felt it was an important skill to learn: working when you don't feel great.  It is a lesson they will need all of life. 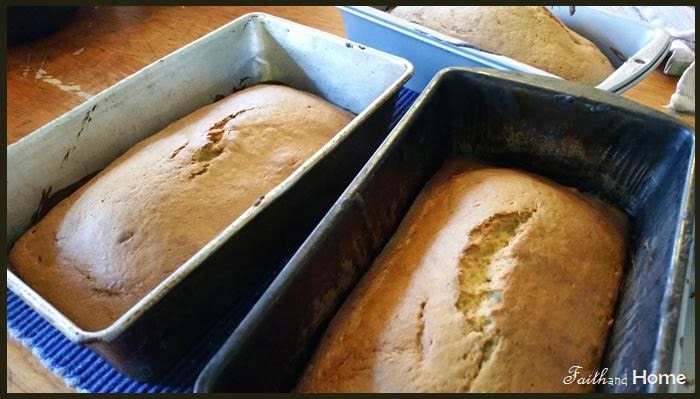 By Tuesday we all felt like "normal" was knocking on our door after a looooong stay far from here!  Ashley made the casual suggestion that "we" should make banana bread to which I replied, "Why yes, YOU should!"  A proud moment for this worry-wort mama, apparently my 16 year old has absolutely no problems jumping in the kitchen and kicking out a double batch of bread shaped goodness with ZERO help from anyone!  Her dad was proud and requested one of the loaves to share at work (his co-workers enjoyed it very much).  Home Ec is in the bag! 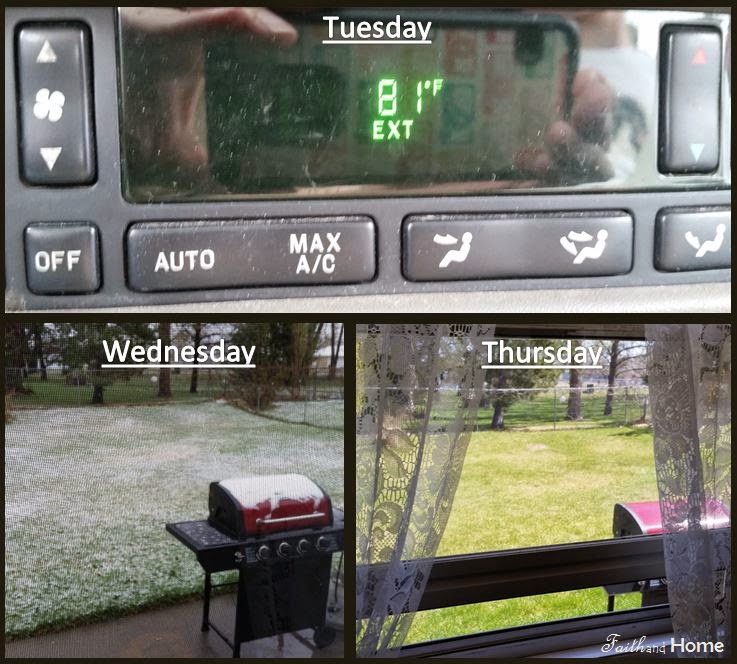 Here is a little side-note on our week: "spring" in south-central Montana.  I'm just glad we got some precipitation in any form.  We all want a bustling garden but need good moist soil first! 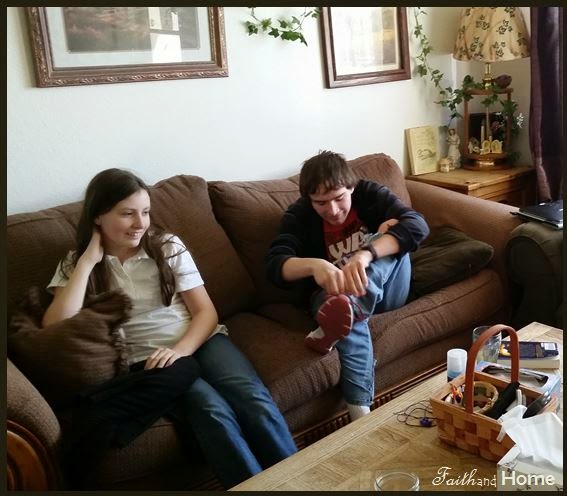 Thursday wrapped up with the first bike ride since illness spread.  Antibiotics having had full effect, Ashley (who had been the sickest) led the pack!  Everyone did great though Brenden's cough re-appeared upon return.  It is manageable and all of us are looking forward to more outings as both weather and viruses clear.

The basic 3 Rs were done through their regular curriculum each morning.  Brenden tried a new Spelling plan which he found interesting since it integrated Language Arts (anything to get done quicker!!).  History, Science and Health were more on a discussion basis.  Our regular curriculum will re-enter next week.  This week I read from the Science section of Under the Influence, How Christianity Transformed Civilization. You can imagine all the bases it covered!  We have been studying the Renaissance mostly through secular resources so this was a great opportunity to discuss the Christian perspective and profound impact men (and ideas) of faith had on this transformational period.

I was excited as I wrapped up grading today and set-up lesson plans for next week.... despite all the missed school, Brooke will finish her math program before we had planned on being done with school for the year!  I am thrilled because we have never made it to the end of a book.... let a lone when so much school has been missed!!  All other subjects and students are another story entirely though!

So that is our last two weeks in review.  I hope it encourages you in whatever ups and downs your homeschool has just now!

Linking up today with: