Becoming the Titus 2 Woman: A Heart for Husband 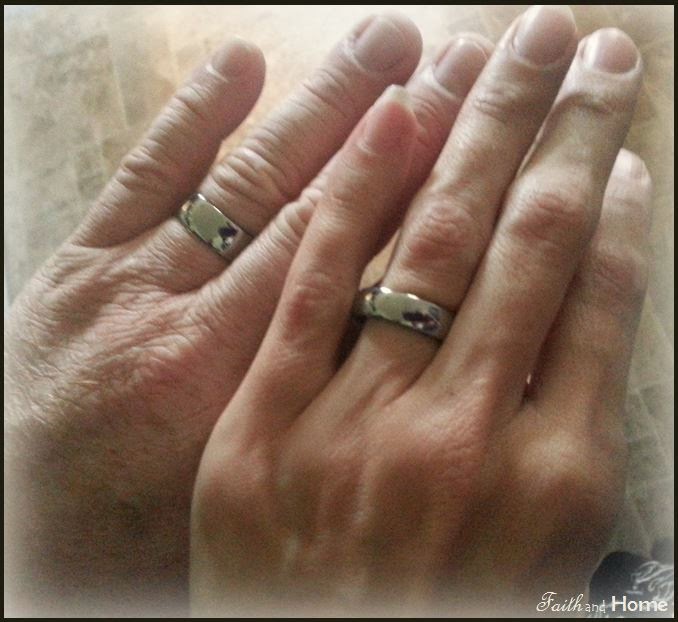 'I can just consider it an arranged marriage.... right?  After all, many admirable women of the Bible (and other areas of history) did it and they eventually found a place of love and peace in their unions.'  This was a repeated thought I entertained, even after my husband finally dedicated his life to Christ.  Somehow I thought, after 10 years of prayer for his heart to be handed over... when the wonderful moment came we would suddenly be peas-in-a-pod.  But here I digress.

You see, I was running from God and he was ignoring the Almighty when we met almost 18 years ago.  He was a short, red haired buzz cut, cigarette smoking, know-it-alling, glass is half empty, t.v. and gaming addict, metal-head, recovered alcoholic with no job and no strings attached.  I was a tall, long dark hair groomed, clothes coordinated, bubble gum rock listening, A+ credit, clean living, no t.v. watching, optimist, who had only mildly partied but no longer had time because I was raising my 3 year old son while working full-time on my own.  Great picture?

How on earth did we end up together?  Good question.  AOL (you know, "You've Got Mail", it really happens... or it did to me anyway) and long phone calls where we talked cooking and kids.  We heard each other's hearts before we discovered the actual countenance (we are talking pre-Facebook, a time when life wasn't on display 24/7).  Meeting in person was meant to cinch the deal but when reality smacked fantasy in the face I was too dizzy from the blow to think straight.  Some of his claims were stretches of the truth.... really, not lies, there was some truth to them... the details were a little foggy though.  But there was something.  I can't explain it except to say everything happened seemingly beyond my plans or intentions. 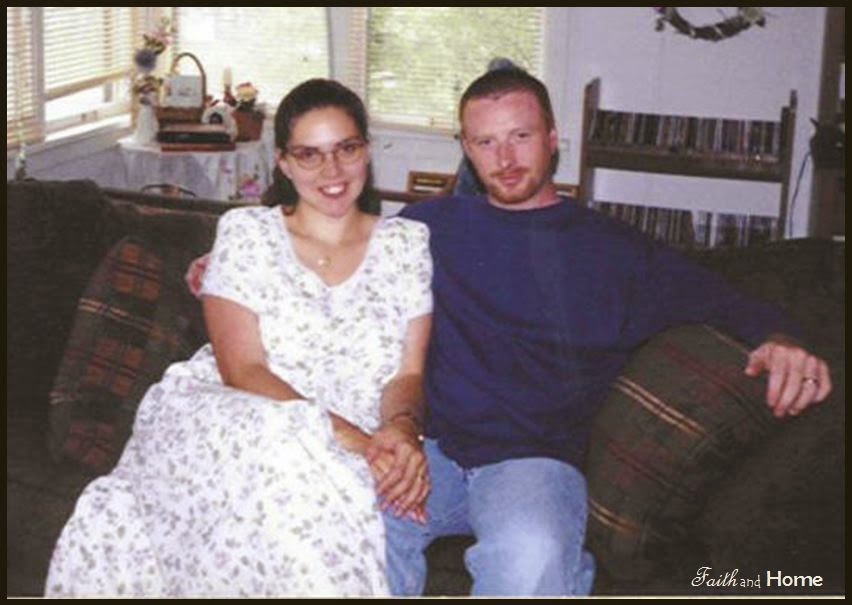 The years that followed were hard ones.  Almost two years after marriage God drew me back into church.  One Sunday a message whopped me right upside the head.  It was actually the message that 6 years before had driven me out of the church; Abraham and Issac... how could God ask a father to sacrifice his son.  I couldn't get behind a God that would do such a thing.  But the Sunday I quit running from God, the eye-opening-earth-shaking-on-my-knees-crying Sunday, I saw how Abraham was deeply trusting his Father and I saw the greatest sacrifice of all through the symbolism of what Abraham prepared to do.  THAT was love, that was trust, what kind of person couldn't see that and want a God so mighty and full of grace?  My faith was set on fire and I haven't stopped running since TO Him since!

Yet, as my faith grew, my troubles did too.  I wanted out of my miserable marriage but I also knew I had gone that route once before.  Divorce had been hard on my oldest son and now I had 3 more children to worry about.  I couldn't just hop around from marriage to marriage because I was tiered of being neglected or tiered of the differences or tiered of the fights. What was more, no matter how I tried to justify the idea of fleeing, God's Word glared His distaste for divorce.  I not only repented of my first disillusion from my first marriage but I committed to follow God on how to navigate the rough seas of this one.

In a pivotal stage of this renewed commitment a particularly nasty argument raged in our house.  I stormed off to vent and grumble about my stubborn pig-headed husband, I looked up to heaven and cried out, 'please God, change HIM'.  God answered almost instantly in a powerful movement of the Spirit I could not deny.  The answer?  'Ok, but first, I am going to change YOU'.  I laughed haughtily.... me, I don't need the change, HE does.  God laid on my heart that He knew we BOTH needed to change but He wanted to start with me. I knew in that moment I had a choice: trust God's plan or keep trying to do it on my own.

He began to show me how my attitude and manner of handling and responding to my husband left a lot to be desired.  God showed me I had a responsibility for myself and MY actions regardless of my husbands.  I reached a point where, when I failed to remember to handle things with grace, I would be nearly in tears over the lost opportunity to SHOW the love of Christ in my words and actions.  It was hard at times.  I had Christian friends who tried to tell me I didn't need to "honor" my husband as the Bible says, they argued those passages as only applying to Christian husbands.  But I didn't see that stipulation.  I saw this one:


To the rest I say (I, not the Lord) that if any brother has a wife who is an unbeliever,
and she consents to live with him, he should not divorce her.
If any woman has a husband who is an unbeliever, and he consents to live with her,
she should not divorce him. For the unbelieving husband is made holy because of his wife,
- 1 Corinthians 7:12-14a

If I am not meant to leave then logic through the Bible dictates I am meant to stay AND show love and grace as Christ did.

In the months and years that followed I experienced so many wonderful as well as hard things.  First, a Bible study I was participating in on prayer asked, "If you had just one thing you could pray about, what would it be?"  I considered our floundering business, our shaky finances, our growing kids.... but that still-small voice said, think bigger.  Business and finances would come and go... kids will grow and change.... ONE thing was everlasting.  ONE thing would help navigate all the rest.  Then and there I bowed my head, "Please, God, give me a husband I can pray with."  I began praying daily for my husband's salvation, refusing to miss a single day.  Whatever my prayers were for him each day, they always ended with, "Please, God, give me a husband I can pray with."

Sometimes it seemed hopeless.  I wondered if God would ever answer.  In order to protect my husband and respect his own testimony I won't divulge details here but I can tell you, there isn't much you could say to me about your own husbands which I couldn't whole-heartedly reply: I understand, but trust me, pray through it.  Some days I still thought maybe I could leave and just stay single as the Bible says is the only acceptable route post-divorce.  But I knew God hated divorce and I was positive he was telling me to stay.  His Word told me so.  And even though I did not have mutual respect and treatment, I wasn't meant to give up... none of us are.

Miracles began to happen.  Little ones at first which I can only now see in retrospect.  One of the bigger steps was one I felt called to add to my daily studies by reading my Bible at bedtime.  My husband, an avid gamer, started to become interested for no apparent reason.  He would shut down his game and come into bed with me and ask me to read to him.  The following year we learned of a Bible study going on next door and he actually wanted to attend.  Then, one day, it just happened.  He surrendered his heart.

It was a private thing and I knew the instant he had because he completely changed.  The edgy, gruff and tough man was replaced by a tender, smiling and loving husband.  Prayer after prayer continued to be answered including God sending mentors to my husband which grew him exponentially faster in his faith walk than anyone else I had ever known.

It took time to work out the change.  I no longer had to be in control of certain areas of our household because he now wanted to take part... to assume his Biblical roll.  I didn't realize it at first, but after 10 years of 'wearing pants' I had a lot of habits to break so our co-leadership would look more respectful and smooth.

The changes in me, which HAD to happen first, produced love, patience and kindness.  Instead of getting angry at him all the time, I learned to give grace and speak tenderly.  I quit yelling and accusing and started talking and asking.  I encouraged the kids through my actions and words to pray for their dad, to love on him and give him grace as I was.  To this day my husband will tell people that what drew him to Christ was seeing the change in me.  Even when I didn't think he was paying attention or caring.... he was and it changed our lives profoundly. 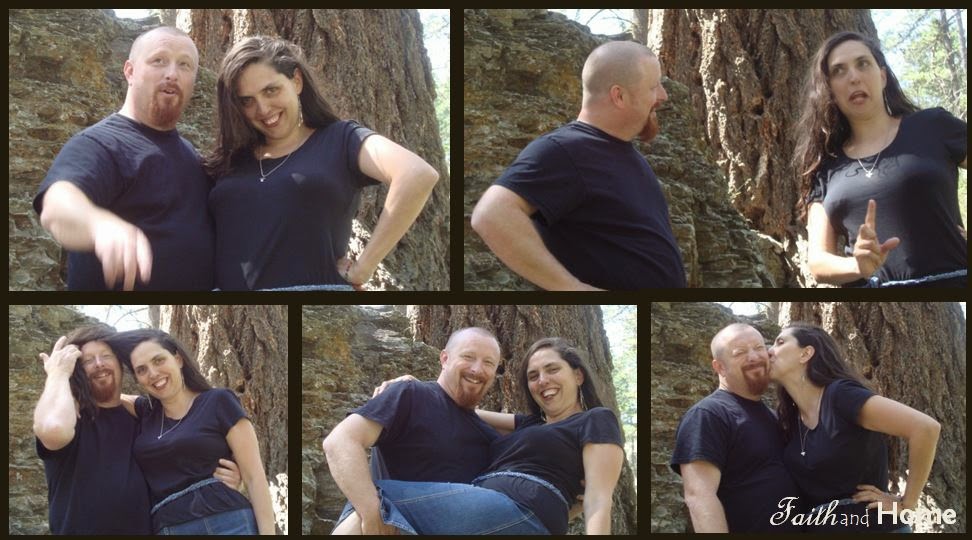 So when you hear me share on this blog, as I did last week, how we are to be submissive to our husbands and I add 'trust me.... no excuses', I hope you understand my heart a little more now.  It has been a very hard road... one which I would travel again and again just to have the humble privilege of seeing God work and have the wonderful faith-filled, EX-cigarette smoking, EX-gaming addict, mission minded, sold-out-for-Jesus husband I have now... and to have this amazing, bigger-than-life, wholly trusting faith and peace God has grown in me through the process. Sure we may still be very different and he may drive me crazy as a result (I'm sure I make him a little crazy at times too!!) but we share the same heart for Christ and that is what matters most! 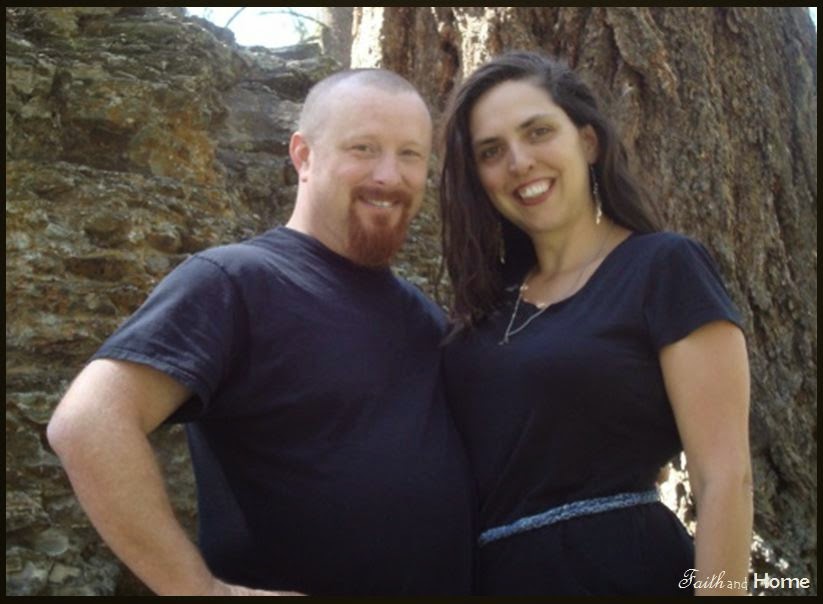 I pray you may know the peace of God's hand on your heart and in your marriage... even if the waters seem rough... that you may Trust He is steering the ship and you WILL make it through!

This article is a follow-up on last week's article Titus Meets Proverbs: Becoming a Titus 2 Woman