All The Ways NOT to Perform an Experiment

Thomas Edison actually had 3,000 attempts to create the light bulb. When asked about the failures he said "I didn't fail 3,000 times. I found 3,000 ways how not to create a light bulb"

I've seen this quote in various forms and suggesting various quantities of attempts... but you get the idea.  And while we were not trying to develop a light bulb this week... we took the Edison stance in our attempts at a science project this week! 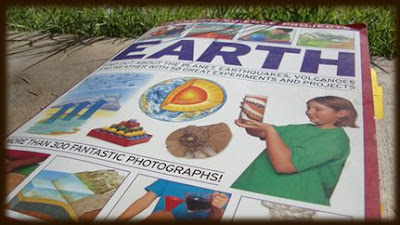 It started with this book we borrowed from the library.

We were wrapping up the plate-tectonics portion of our science studies; volcanoes, earthquakes, creation of mountains, etc.  We have done some small experiments along the way but when I saw some of the ideas in EARTH, I wanted to just spend an afternoon exploring more!

We had hoped to do at least 4 of the experiments but the time we took on the 2 we got done... we had to call it good at that!  Time because this mama learned, living in surroundings NOT my own, it isn't enough to know supplies exist... one must also have supplies in hand the day before planned experiments.  (Apparently, other people figure they can move their own stuff without telling anyone!! *haha*)

Therefore, we were missing 2 vital pieces to our first experiment and had to improvise.

Experiment #1 - CO2 within a Pyroclastic Cloud and the effect on Oxygen
The idea:
- create CO2 with baking soda and vinegar
- observe Oxygen with burning candle
- funnel CO2 into container with candle and watch as flame goes out, indicating O2 leaving the area

We were suppose to have a votive candle, a jar, a straw, some clay, a bottle, vinegar, and baking soda.
The votive should have set down in the jar creating an environment easy to trap CO2.
The straw was suppose to stick into the clay, covering the bottle, filled with the CO2 producing mixture.
The other end of the straw was supposed to be placed OVER the candle so the CO2 could 'pour' onto the flame.

We had NO votive or straw... both of which I thought we had!

So we improvised:
Attempt #1, How NOT to perform Experiment #1 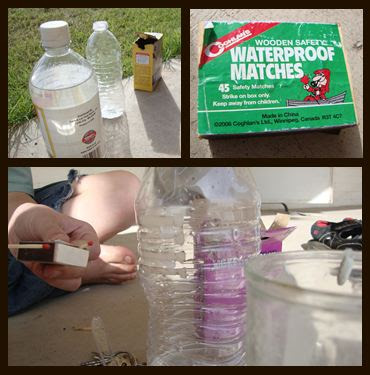 Idea: Quickly lift lid of bottle as CO2 pours out and watch as it extinguishes match.

Result: The matches wouldn't stay burning for an effective observation.

Attempt #2, How NOT to perform Experiment #1 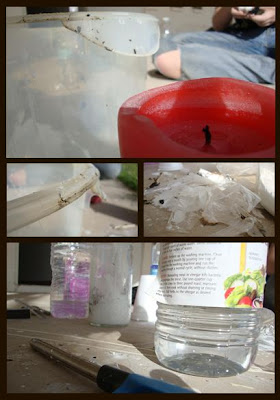 Idea: Use larger candle in our possession, place in large plastic bucket, create CO2 in bottom, watch CO2 rise in accordance with flame going out... had to trap CO2 by placing a 'cover' over bucket so we taped on Wax Paper.

Result: Almost set fire to the lot behind the church.  Half-expected a neighbor to call the police on the 'crazy people' playing with matches on church property!!  Simply: I didn't stop to consider the height and heat ratio when compared to the flammability and and relative height of the wax paper covering.  Evidenced by middle two pictures.


Attempt #3, Listen to 9th grader, who actually pays attention in science, because she made this less dangerous suggestion from the start!.... How TO improvise in performing Experiment #1!!! 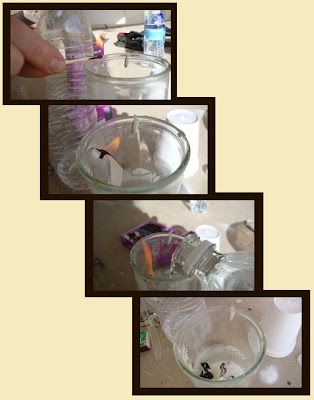 This
is
how
it
is
done!

Idea: We lit a piece of slow burning, thick paper after anchoring it in clay inside of a tall thin glass.  Baking soda in bottom of cup, we poured in the vinegar and as the CO2 rose, the flame went out. 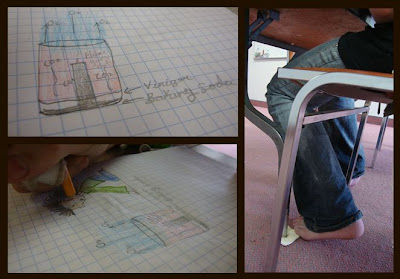 I loved the wet-legged, barefoot snapshot as she worked at her Science journal.  Wet why?

Because Experiment #2 explored the continents, density and drifting on the mantel:

Much less trouble then the flame.  Brooke began to stack rocks to simulate volcanic build up to create an island much like Hawaii!

There sure was a lot of H2O! 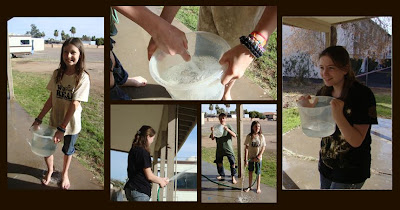 In the end we ended up with extra experiments:

1 in Centrifugal forces as a bucket full of water is swung around without spilling
1 in refraction (bottom right)
1 in reflection (water from cement onto wall under awning, bottom middle picture)

Oh, and for those who are wondering, yes, quite the water fight ensued... it was in the 70s here and to our Montana skin.... that is a heat wave!

I am loving this Charlotte Mason-y type of exploring.  What did we ever do before it?  Thank you to those who have encouraged me in these adventures.  If you haven't tried learning through exploring... you should!  Soooooo much fun for all!