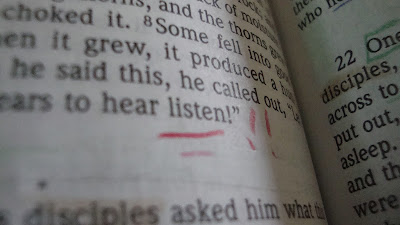 Dr. Luke understood medicine.  He was, after all, a Doctor.  I am told he used more medical terms in his gospel than Hippocrates did in his Corpus (medical manual).  I must confess, I am no Hippocrates expert... but that is a bold and interesting statement.

So when Luke recounts the bleeding woman and dieing child in Luke 8, and I know this, I find the corresponding stories even more interesting.  He saw the miraculous events as essential in his report on the example of this MAN, Jesus', deity... perhaps I should consider them in more than a passing glance too....

Now there was a woman who had been suffering from hemorrhages for twelve years; and though she had spent all she had on physicians, no one could cure her. She came up behind him and touched the fringe of his clothes, and immediately her hemorrhage stopped.
Luke 8: 43-44 (NRSV)

I have always loved the display of faith in this story.  I was a woman who bled for many years.  Eventually I had to undergo a full hysterectomy.  If I could have only 'touched the fringes of Jesus' clothes', perhaps I would still be able to have children.  Perhaps my experiences have been used by God to see the deep value of this story. Bold Faith Step #1
According to Levitical law, bleeding like this woman's would have made her unclean.  More-or-less forbidden to be out in the streets with a thronging crowd.  To touch others would have made them unclean. BUT, Jesus was passing through and she had heard of His healings... she believed if she could just-touch-that-fringe.  She had to take her chances....

Bold Faith Step #2
A fringe that heals?  Where did she get such a crazy idea?  As my research shows, she may have heard it read from the scroll of Malachi (1):

But for you who revere my name the sun of righteousness shall rise, with healing in its wings. You shall go out leaping like calves from the stall.
- Malachi 4:2 (NRSV)

The word "wings" in Hebrew is "kanaf" and it means fringe-like feathers.  How does this tie to the woman and the "fringes" she touched on Jesus' prayer shawl (yes, he wore one... he was Jewish by birth!)  An excerpt from a  really great article at The Refiners Fire.org sums it up well:

As the article continues, an understanding of the Hebrew terms and their relation to Jesus' shawl and tassels is revealed.  When the bleeding woman touched his tassels she showed great faith in Jesus' authority to heal her.  And her faith was rewarded. 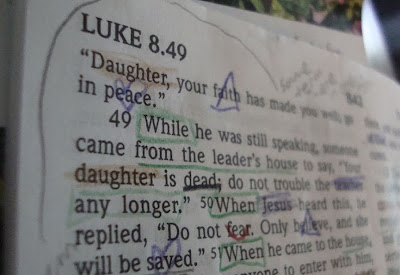 All of this happens as Jesus is on His way to see about healing Jarius' daughter (a synagogue leader) who ends up dieing as he is in transit (and calling out the mysterious fringe toucher!!)  But Jesus is not swayed.  They may say "Do not trouble the teacher any longer."  (8:49) but Jesus says, "Only believe and she will be saved."

In my NRSV "saved" here is translated as "made you well" just a few verses earlier when the bleeding woman is restored.... but they both mean the same thing in Greek:  saved from suffering...

It all begins to pop out with a little bit of digging...

Are you ready to move onto application?  Because the message God revealed to me as I studied this chapter yesterday was this:

Jesus wants to save us from suffering too.  I am told the bleeding woman didn't merely lightly touch His fringe... she grabbed onto it.  I found myself asking... am I GRABBING onto the fringes of Jesus' authority too?  And then I thought of you... all who travel to this blog... all your hearts... in all the different places... past, present and future.... do you need to hear that Jesus wants to save YOU from suffering too?  Do you need to be reminded to just grab onto the fringes... and don't let go.  HE will see your faith, and He will heal your heart.

You can be healed, reach out, hold on.

God's Word is unchanging.  People are still the same as they were 2000 years ago... we are all looking for something and there is ONE who holds all we are looking for.  I pray you dig and discover... that you reach out and hold on tight.

Linking up with Michelle at Some Girl today :