A Parable in Modern Form 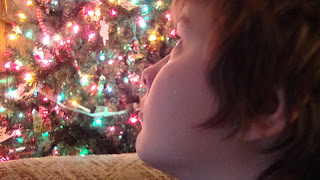 The day had just begun, everyone was still asleep except my youngest son who sat on the other end of the couch, legs curled under him, gazing up at the brightly lit tree.  At 11, he does not look or act like other kids his age.  Def in his youngest ears, suspicions of mild Cerebral Palsy and a severe case of Dyslexia, he doesn’t think like other kids either.
But don’t be fooled.  It isn’t these, shall we say, bumps in the road that make him different… it is his heart. 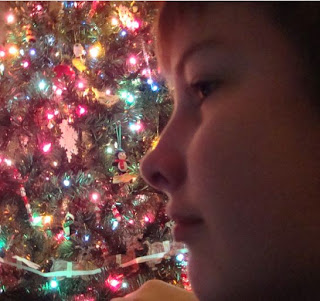 He interrupts the silence to ask, “Do you think Santa worships Jesus?”  Yes, he still believes and yes, Santa visits our house every Christmas!
I was startled from the pages of the book sitting in front of me.  How could he ask that?  Haven’t we had a statue of Santa at Jesus’ manger displayed every Christmas season to remind everyone Who it is really all about?  Or is it the general commercialism of the season that has stolen the King’s Throne… have I added to that? 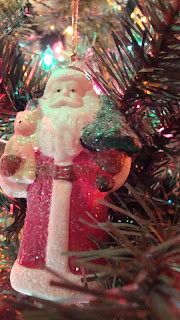 I know the stories of St. Nicholas, what a good and kind heart he had for children and his reverence towards God.  How he helped influence the Bible we read today and his passion for people and the realness of his charity to mankind.  That is why we honor the traditions of his visit down our chimney.  Like a modern parable for children to understand what selfless giving looks like.
As my children age and come to ask, “Is he real?”  I find myself repeating what my mother told me many years ago… he is  real, in our hearts.  I want to sing it to the Virginias of the world that, yes, he really did exist and his obedience to God's message through him was so strong that it makes him almost real today... a legacy lasting nearly 17 centuries.  He is a servant of our Savior, a bearer of gifts like the Gift God so graciously and generously sent down at Christmas.
So as I sat, looking into the innocent face of my youngest son, the one with the missionary’s heart who never stops praying, never stops hoping and always tries to think like Jesus… I began to ask myself; 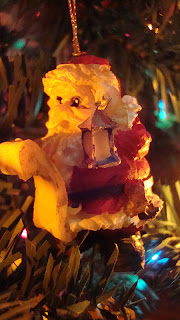 What if we looked at Santa differently.  Not just some jolly elf but rather a missionary of God appointed and ordained to the task at hand. 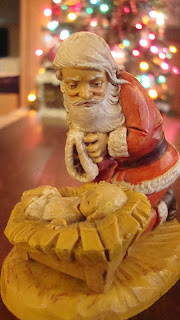 What if we saw Santa as hat in hand at the cradle of Jesus, bestowing honor and glory where it is truly due? 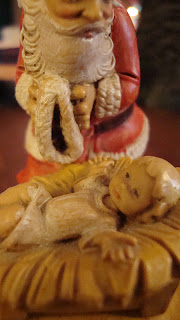 What if we left cookies and milk as a measure of hospitality, a way to teach our children how to take care of others the way Jesus calls us to? 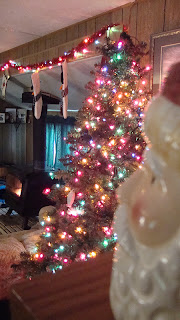 What if the magic many believe was simply the symbol of God’s ordaining power to man to carry out his greatest calls.  The super-natural strength when God is before us… when He is in control.
He called a little child, whom he placed among them. And he said: “Truly I tell you, unless you change and become like little children, you will never enter the kingdom of heaven. Therefore, whoever takes a humble place—becoming like this child—is the greatest in the kingdom of heaven. And whoever welcomes one such child in my name welcomes me.
Matthew 18:2-5 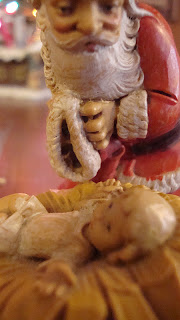 If to see the Kingdom is to see as a child, doesn’t Santa embody that aspect… this parable in modern form? I'm not saying we worship him, only God deserves our worship.  But what if we allow that wonder by helping it bring the kingdom closer... what if we show our children not to bow to Santa but to see Santa bow before the king because all mankind should bow like that too?
Yes son, Santa worships Jesus.  Jesus is why Santa does his job.
Let us, at Christmas, reclaim CHRISTmas.  Even as Santa readies his sleigh.
Many blessings this CHRISTmas season!