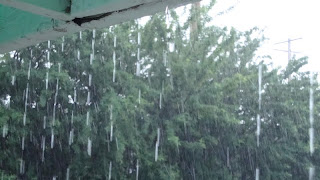 It started pouring, a torrential down-pour like nothing I had seen since I lived back East. 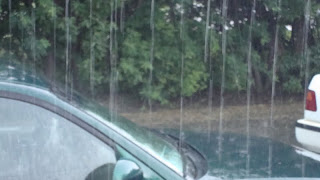 As the large drops pounded the roof, I grabbed my camera to document the experience. 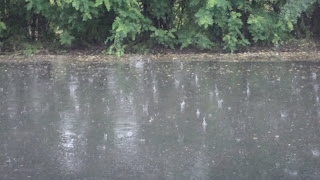 The splatter, the thunder, the lightening did not cease for at least 20 minutes.  It just kept coming.

In my heart I marveled and wondered and realized how exhilarating the experience was... and how much these storms can coincide with the trueness of life.

Hearts hurt, it is a harsh fact of the human condition.  The inflictions very just like the drops that fall from the sky.  One thing is certain and consistent; the pain that remains.

What do you do with that pain?  Where does it go, when does it stop?  My own hurts have stemmed in childhood, been renewed as an adult and never seem to quite stop when others, without thought or realization, push an offense.

Like the rain pounding, the thunder rumbling and the lighting crashing, my mind and my heart race and my hurts flood down.  Where do I let them go?  Where do they pool?

For the last 3 years I have worked to smooth out the pooling places in my heart.  Something God showed me to do one winter when my hurts were at a high and wounds were raw and gaping from years of festering.  I couldn't handle the ache anymore so I crumbled before Him who heals all hurts.

It took some ponderings but I realized that the biggest problem was me wanting to be justified.  Wanting others to admit their wrong.  Desiring to have my due reward and right to mangled pain I had become bitter and ugly.

I wanted to be beautiful and renewed.  Like the rush of light and the freshness of green when the rain stops and the sun shines.  I wanted that in my very soul.

I sought God's forgiveness for me, for my harboring of pain and animosity.  I told God I forgave those who hurt me, even though they didn't know and understand the extent of the affliction, even though some of them continued to hurt me. I lifted them to Him and I prayed for their hearts to know truth and love and hope and peace.

In my moment of submission, the rain fell and washed away the dirt.  As I rose, the light poked through the darkness and the storms cleared up.  The forgiveness filled the holes in my heart and the rain dried, leaving no puddles.

Hope was renewed.  Fresh and alive and exhilarated.

Be kind to one another, tenderhearted, forgiving one another, as God in Christ forgave you.  - Ephesians 4:32


I may not know what hurts will come or how deep they will try to bore.  But I do know the One who saves, the One who brings Hope and the One whose forgiveness is always worth emulating.  I will trust in Him.  I will rest in His comfort and protection.  I will not be hurt for the Lord God is with me.

When the rains pour in your life, I pray you know His peace and forgiveness, that the clouds clear and the sun shines and you feel Him with you too. 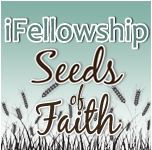 Every life has testimonies of how God intercedes to show His power and glory.  To read the first installment in a brand new series of books about God's divine work in one person's life, click below

Email ThisBlogThis!Share to TwitterShare to FacebookShare to Pinterest
Labels: Walk with Him Wednesdays